In this post I will give a brief introduction for all commonly used virtual interfaces. There is no code analysis. Only brief introduction and the usage on Linux. So anyone with a network background could have a look at this blog post. The interface list can be obtained with the command ip link help.

The first part is some frequently used interfaces and some interfaces that can be easily confused with one another. The second part will be a brief introduction of all kinds of tunnels(TBD).

What is a bridge

A linux bridge behaves like a network switch. It forwards packets between interfaces that are connected on it. It’s usually used for forwarding packets on routers, gateways, or between VMs and network namespaces on a host. It also supports STP, VLAN filter and multicast snooping. 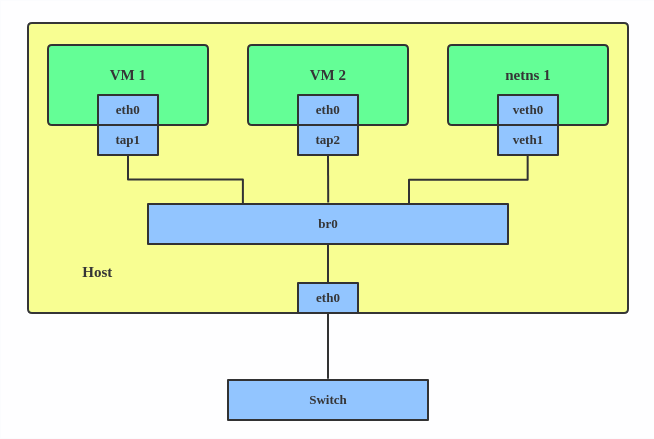 When to use a bridge

When you want to establish communication channels between VMs, containers and your hosts.

How to create a bridge

This creates a bridge device named br0 and set two tap devices(tap1, tap2), a veth device(veth1) and a physical device(eth0) as its slaves, as shown in the picture.

The Linux bonding driver provides a method for aggregating multiple network interfaces into a single logical “bonded” interface. The behavior of the bonded interfaces depends on the mode; generally speaking, modes provide either hot standby or load balancing services. 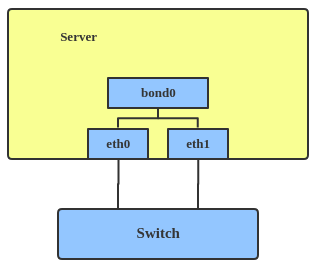 When to use bonding

When you want to increase your link speed or do failover on your server.

How to create a bond

Similar to bonding, the purpose of the team device is to provide a mechanism to team multiple NICs (ports) into one logical one (teamdev) at L2 layer. 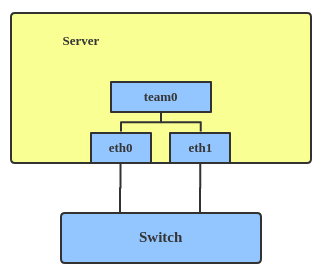 The main thing to realize is that the Team project is not trying to replicate or mimic the bonding driver. What it does is to solve the same problem using a different approach, using e.g. lockless (RCU) TX/RX path and modular design.

When to use team

When you want to use some features that bonding doesn’t provide.

How to create team

More info: a new driver called net_failover has been added to linux recently. It’s another failover master netdev for virtualization and manages a primary (a passthru/vf device) and standby (the original paravirtual interface) slave netdevs. 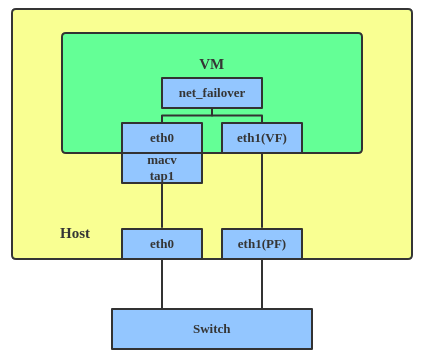 VLAN, aka virtual LAN. It separates broadcast domains by adding tags to network packets. VLANs allow network administrators to group hosts under the same switch or between different switches.

When to use VLAN

When you want to seperate subnet in VMs, namespaces or hosts

How to create VLAN 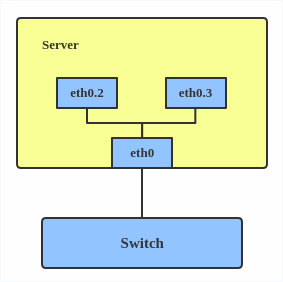 Note: When configuring a VLAN, you need to make sure the switch connected to the host is able to handle VLAN tags, e.g. by setting the switch port to trunk mode.

VXLAN(Virtual eXtensible Local Area Network) protocol is a tunnelling protocol designed to solve the problem of limited VLAN IDs (4096) in IEEE 802.1q. It is described by IETF RFC 7348.

VXLAN encapsulates Layer 2 frames with a VXLAN header into a UDP-IP packet, which looks like:

When to use VXLAN

VXLAN is typically deployed in data centers on virtualized hosts, which may be spread across multiple racks.

How to create vxlan

For reference, you can read the vxlan kernel doc or an other vxlan introduction

Before MACVLAN, if users wanted to connect to physical network from VM or namespace, they would have needed to create TAP/VETH devices and attach one side to bridge, and attach a physical interface to the bridge on the host at the same time. 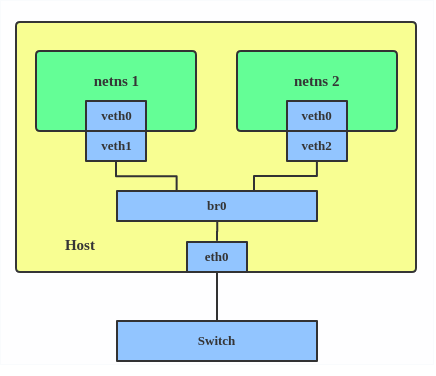 Now, with MACVLAN, they can bind a physical interface, associated to a MACVLAN, directly to namespaces, without the need for a bridge. 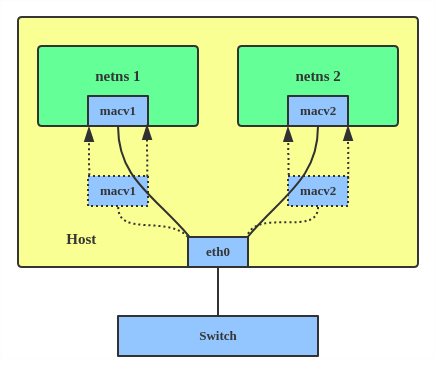 There are four MACVLAN types:

The type is chosen according to different needs. Bridge mode is the most commonly used

Users want to connect directly to physical network from Containers.

IPVLAN is similar to MACVLAN with the difference being that the endpoints have the same mac address.

IPVLAN supports L2 and L3 mode. IPVLAN L2 mode acts like a MACVLAN in bridge mode. The parent interface looks like a bridge or switch. 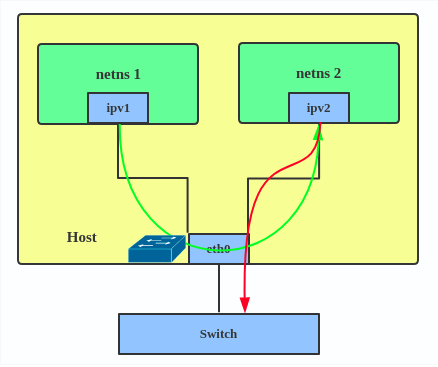 In IPVLAN l3 mode, the parent interface acts like a router and packets are routed between endpoints, which gives better scalability. 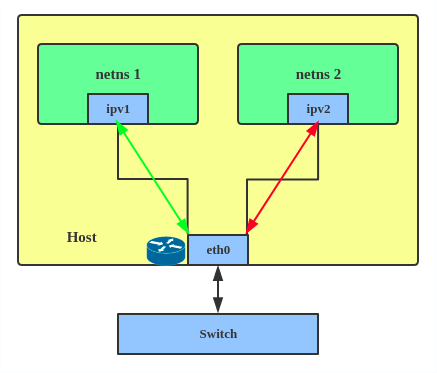 Quoting the IPVLAN kernel doc
MACVLAN and IPVLAN are very similar in many regards and the specific use case could very well define which device to choose. if one of the following situations defines your use case then you can choose to use ipvlan -

MACVTAP/IPVTAP is a new device driver meant to simplify virtualized bridged networking. When a MACVTAP/IPVTAP instance is created on top of a physical interface, the kernel also creates a character device /dev/tapX to be used just like a TUN/TAP device, which can be directly used by KVM/QEMU.

with MACVTAP/IPVTAP, we can replace the combination of TUN/TAP and bridge drivers with a single module. 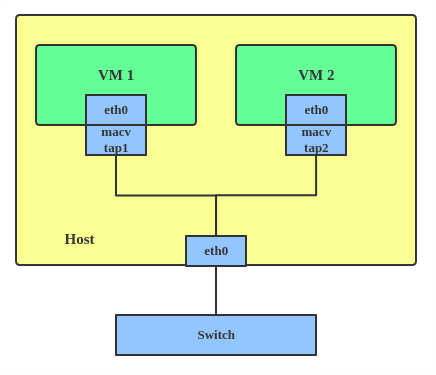 Typically, this is used to make both the guest and the host show up directly on the switch to which the host is connected. The difference between MACVTAP and IPVTAP is same with MACVLAN/IPVLAN.

MACsec is an IEEE standard for security in wired Ethernet LANs. Similiar to IPsec, as a layer 2 specification, MACsec can protect not only IP traffic, but also ARP, neighbour discovery, and DHCP. The MACSEC headers looks like

When to use MACsec

The main use case for MACsec is to secure all messages on a standard LAN, includeing ARP, NS and DHCP message. 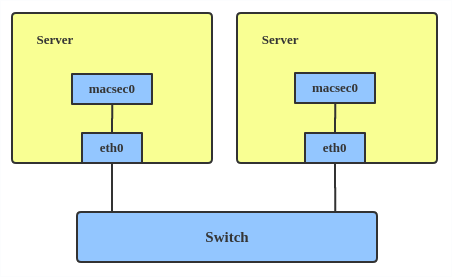 How to setup MACsec

Note: This only adds a MACsec device macsec0 on interface eth1. For more detailed configurations, please see the “Configuration example” Section in MACsec introduction by Sabrina

This device is a local Ethernet tunnel. Devices are created in pairs.

Packets transmitted on one device in the pair are immediately received on the other device. When either device is down the link state of the pair is down. 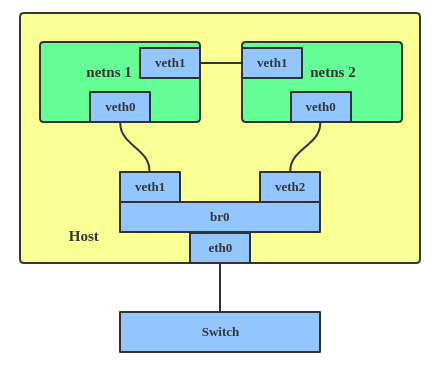 When to use VETH

When namespaces need to communicate to the main host namespace, or between each other.

How to setup VETH

Similar to the network loopback devices, VCAN offers a virtual local CAN (Controller Area Network) interface, so users can send/receive can message via VCAN interface. CAN is mostly used in the automotive field nowadays.

For more CAN protocol information, please refer to kernel can doc

When to use CAN

When you want to test a CAN protocol implementation on the local host.

How to create VCAN

Similar to the veth(virtual ethernet) driver, vxcan(Virtual CAN Tunnel) implements a local CAN traffic tunnel between two virtual CAN network devices. When creating a vxcan, two VXCAN devices are created as a pair. When one end receives the packet it appears on its pair and vice versa. VXCAN can be used for cross namespace communication.

When you want to send CAN message across namespaces.

IPOIB a device to support IP-over-InfiniBand protocol. This transports IP packets over InfiniBand so you can use your IB device as a fast NIC.

When you have an IB device and want to communicate with a remote host via IP.

nlmon is a netlink monitor device

When you want to monitor system netlink messages

The dummy interface is entirely virtual, like e.g. the loopback interface. The purpose of dummy driver is to provide a device to route packets through, without actually transmitting them.

When to use Dummy

It was used to make inactive SLIP address look like a real address for local programs. Nowadays it’s mostly used for testing and debugging.

How to create Dummy

The IFB (Intermediate Functional Block) driver supplies a device that allows concentration of traffic from several sources, and shaping incoming traffic instead of dropping it.

When to use IFB

When you want to queue and shape incoming traffics.

How to create an IFB interface

And redirect ingress traffic from the physical interfaces to corresponding ifb interface. For eth0 -> ifb0:

Again, repeat for eth1 -> ifb1, eth2 -> ifb2 and so on, until all the interfaces you want to shape are covered.

Now, you can apply all the rules you want. Egress rules for eth0 go as usual in eth0. Let’s limit bandwidth, for example:

The advantage of this approach is that egress rules are much more flexible than ingress filters. Filters only allow you to drop packets, not introduce wait times, for example. By handling ingress traffic as egress you can setup queue disciplines, with traffic classes and, if need be, filters. You get access to the whole tc tree, not only simple filters.